Preparing for a doomsday scenario that could destroy the Earth, scientists from the University of Arizona have proposed building an underground ark hidden in a network of tubes on the Moon that could provide a genetic backup for the planet, CNN reported.

“Earth is naturally a volatile environment,” said researcher Jekan Thanga, a professor of aerospace and mechanical engineering in the University of Arizona College of Engineering. “As humans, we had a close call about 75,000 years ago with the Toba supervolcanic eruption, which caused a 1,000-year cooling period and, according to some, aligns with an estimated drop in human diversity. Because human civilization has such a large footprint, if it were to collapse, that could have a negative cascading effect on the rest of the planet.”

Dubbing their project a “modern global insurance policy,” the scientists’ plan is to fill the ark with millions of seed, spore, sperm and egg samples from Earth’s species that would be cryogenically preserved.

They said the vault could protect the genetic materials in case of “total annihilation of Earth,” which would be triggered by a major drop in biodiversity.

The researchers stressed that the idea is dependent on advancements in cryo-robotics technology and that any move to construct such a bunker is a long way off.

They presented their idea at the recent IEEE Aerospace Conference, saying that the Moon would have the advantage of being removed from the “doomsday” scenario that could destroy the Earth, IFL Science reported.

The scientists also admitted that they are not sure how a lack of gravity could affect preserved seeds, or how to communicate with an Earth base. full story 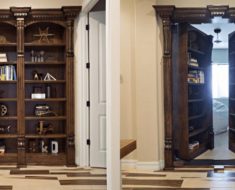